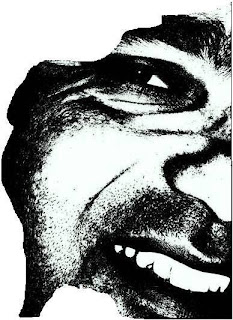 Kamel Riahi was born in the village of Al Manafikh, Tunisia, in 1974. Riahi, who is the head of the Arab Higher Institute for Translation, has recently moved back to his native Tunisia, and works as a full-time author. After having received his Masters in Arabic literature, he is currently preparing for his PhD in modern Arabic literature. He has published a number of short stories and novels, most notably The Scalpel, which won him the 2007 Comar D’Or for Arabic literature. Last November, Riahi joined four other Beirut39 participants at the inaugural ‘Nadwa’ (writers’ workshop) held by the International Prize for Arab Fiction. His texts have been translated into English, French, Italian and Hebrew. Riahi talks to Beirut39 about the racial representation of the characters in his novels, and his previous life as a nomad.

This journey has taught me that a human is like an idol, of whom Hemingway once said “a man can be destroyed but not defeated”. My life is full of ups and downs, an experimental life that never runs out of adventures. I answer to its appeal like a man haunted with a Jinn, playing hide-and-seek, I defeat it and it defeats me. I feel like I have a magical power that moves me to try and uncover it. I am not aware of what sort of power I may have, but it feels as if a creature larger than myself lives inside of me, struggling to break out to the world.

I started writing before I was conceived, I was in my mother’s womb, busily recording her plot to shed my blood and abort me. I struggled with all the medications and drugs she took to abort the baby, I counted her breaths.

I only started publishing in my twenties, after having lost my father.

And who are some of your most influential writers?

I am an avid reader to the point where I no longer remember who I read. I cultivate books and experiences, yet I never get influenced by anyone. I have always been myself: a complex identity yearning for independence. I love being a Bastard. I lived an orphan, and I loved being an orphan because this helped me become who I am. I have no idol, no father, no symbol and nothing is sacred.

There is a character in your novel, The Scalpel, who the narrator simply refers to as “the negro” (in Arabic as النيقرو.) At one point the narrator describes “the negro” as ‘simple and miserable’, one who reminds him of Mersault from The Stranger. Albert Camus characterized Mersault as being apathetic and alienated. These types of ‘racial’ social characterizations are similar to Ibn Khaldun’s writings. Would you say this is a deliberately placed connection?

I cared for the blacks in Tunisia so I tried to overcome the ideological arguments regarding them towards a psychological approach, and to show their daily suffering. The Negro in The Scalpel is a secondary character, yet he pleased my readers and nearly became the protagonist. A black man who hailed from the Tunisian countryside to became a guard at the “Jillaz” cemetery, the largest in Tunis. He is rebuked for being black. He lives a miserable life with his friend Bu-Lihya (the bearded one), both of them live in the same situation and pursue the same mystery: the case of the women’s assassinator. Both characters disappear on the same day in mysterious circumstances as if both are the two faces for the same token: one black, the other white, both of which are lost in the wilderness of the city.

The Negro chose to be called by this name because it reflected his color, his name did not suite him well, Saïd (The happy one), he felt alienated by that name.

It might come as a surprise to you to learn that Negro was the term people called my black grandfather. I consider myself as someone of a Negro decent, although I am not black. Perhaps my wide nose proves this theory. Therefore, I am sympathetic towards the blacks ideologically, by heritage and by history. We, the whites, will not be liberated until we liberate ourselves from the racist views we have of other races and religions.

We still curse each other using “you’re Jewish” or “you’re Kurdish”, this is also racial and religious discrimination. Watch any Egyptian sitcom and tell me about the image of the Sudanese character. Listen to the Tunisian jokes about the Libyans or jokes about people from Hums in Greater Syria. Listen to the debates regarding noble families and family lineage… even horses now are divided between what is considered “noble” and what is not. We are racists to the bones. Attempting to hide or silence this fact will not help with the matter because we are a sick society which still suffers from the complexes of color and race.

The narrative structure in The Scalpel is constantly changing. It’s like reading a collage of prose. At one point the dialogue turns into an academic debate about male vs. female sadism. You could, perhaps, create several stories out of your novel, or perhaps even a film. Have you ever thought of writing for cinema?

I have always maintained a certain relationship with “the image”. I had my preoccupations in painting and photography. Later, I had an infatuation with cinema, so I took a course on the history of cinema and accelerated at it, this was due to the connection I had with the world of images that I maintained unconsciously. I worked during my vacations with photographers. I remember my first taste of working in photography, which was working for a weird photographer who was a huge fan of one of the major soccer teams in Tunis (he died after a heart attack following one of the defeats of his team in the early 1990s). Before he passed away he refused to give me my wage after he learnt that I was a fan of the other team. His image cannot be erased from my memory, as it is associated with tough pleasure: photography and the wasted hard work.

Later, I started working with a talented photographer, who not only made me adore photography as an art, but also made me infatuated by the strange environment it takes place in (which inspired a great deal of themes in my novel The Scalpel.)

This photographer used to assign me the “hard tasks” as he would call it. Those included photographing weddings at remote areas, somewhere beyond the sun.

I would hop on trucks, buses, and mules to reach those areas where no car would dare reach. There, I found strange and fascinating human examples that later created an important portion of my subconscious memory. An image is a form of guilty pleasures. This is why it is hard to try and find a picture of my mother as a young lady. All of her photos were taken for a reason: identification, health card… a silent photo of a live nature. An image has the power to steal the identity of an entire nation or culture. This is what we learned from the paintings of Orientalists who celebrated the (grieving) Arab female body.

Photography and writing are synonymous. A novelist, in my opinion, takes photos of created images, a hunter for passing faces. He is, however, knowledgeable in the perspectives at which a photo must be taken, the level of luminosity and shadow, and he is a color expert. In my opinion, a novelist must learn a little about other arts, such as painting, photography and filmmaking. He must be capable of blending in these arts and techniques into his narration. This is exactly what I did in The Scalpel and what I am doing now in The Gorilla and Diaries of a Slain Person. I wrote for the theater and I wrote about the cinema as a journalist, and there are now attempts to adapt my novel, The Scalpel, into a movie.

Tunisian publishers are less active in markets of the Arab East and the Gulf region. Rarely do we see Tunisian novels translated into English, yet in terms of output Tunisia is said to publish over 1,000 books per year. Do you think this is a problem of production?

I care less about the reality of any institution, including the reality of Tunisian literature. I only care about what I write. This question must be posed to a minister of culture.

Will this be your first time in Beirut? What are you anticipating from the Beirut39 Festival?

…the very first time, I have no anticipation. I walk my own way. The future is not made by festivals. Festivals are for celebration only. We will celebrate.