Business School and Chocolates – an Interview with Basim Al-Ansar 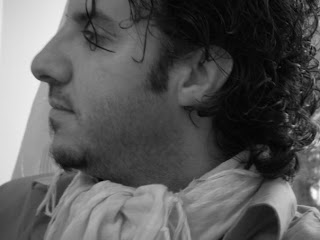 I like to use the word discursive. Not in the theoretical sense, but in trying to capture a person’s tangential tendencies while moving from one subject to the next in a conversation. Well…not everyone agrees with my usage of the word in this context – but I must say, without objection, that Bassim Al Ansar, the 39-year-old poet from Iraq, is a discursive writer.

How long have you been (unprofessionally) writing?

I then got up from bed, horrified. I went outside to the courtyard of our bleak and old house and walked to an open space where the sun reaches almost every corner. After I found a shaded spot, I sobbed in an unprecedented anguish. Since that day those questions have lingered in my head., so I found comfort in writing, in trying to answer those bloody questions in one way or another.

Writing can be a painful process, yet we endure it as writers for reasons unknown to me. When did the act of writing consume your daily life?

Of the Iraqi writers you grew up reading who influenced you most as a writer?

If you were told you could only have one book with you for the remainder of your living life, what would it be?

In 1999, you started a literature magazine in Denmark, where you currently live. How did the Danish literati react to this?

In your poem, A Panorama of Wonder, you write not just of war as it is – but a sort of chanting incantation of the surrealism that surrounds the people of Iraq. I do not feel sadness in the poem. There is something beautiful about devils transforming dust into butterflies and soldiers eating their rifles.

Such poems are pre-shaped in their meanings and content, and I reject such practice in poetry. Every poem that I write has certain objects which it discusses, but it is not centered on a single frame of discussion. I lean towards a rich and diverse content that is open to various interpretations. A stereotypical poem is an ideological one, making it limited inside a single frame.

My poem “A Panorama of Wonder” is a multi-purpose text, it is where you find war, love, freedom, awaiting, diaspora, unity, and so on…

The primary feature of this text is that it declares its wonder towards the many poetic images that I created. Wonder here hides its true nature, I intentionally did not reveal whether it is a sad one, or a happy one. I left it for the reader to enjoy this poetic game, the way I personally enjoy it.

Finally, what do you anticipate from the Beirut39 Festival?